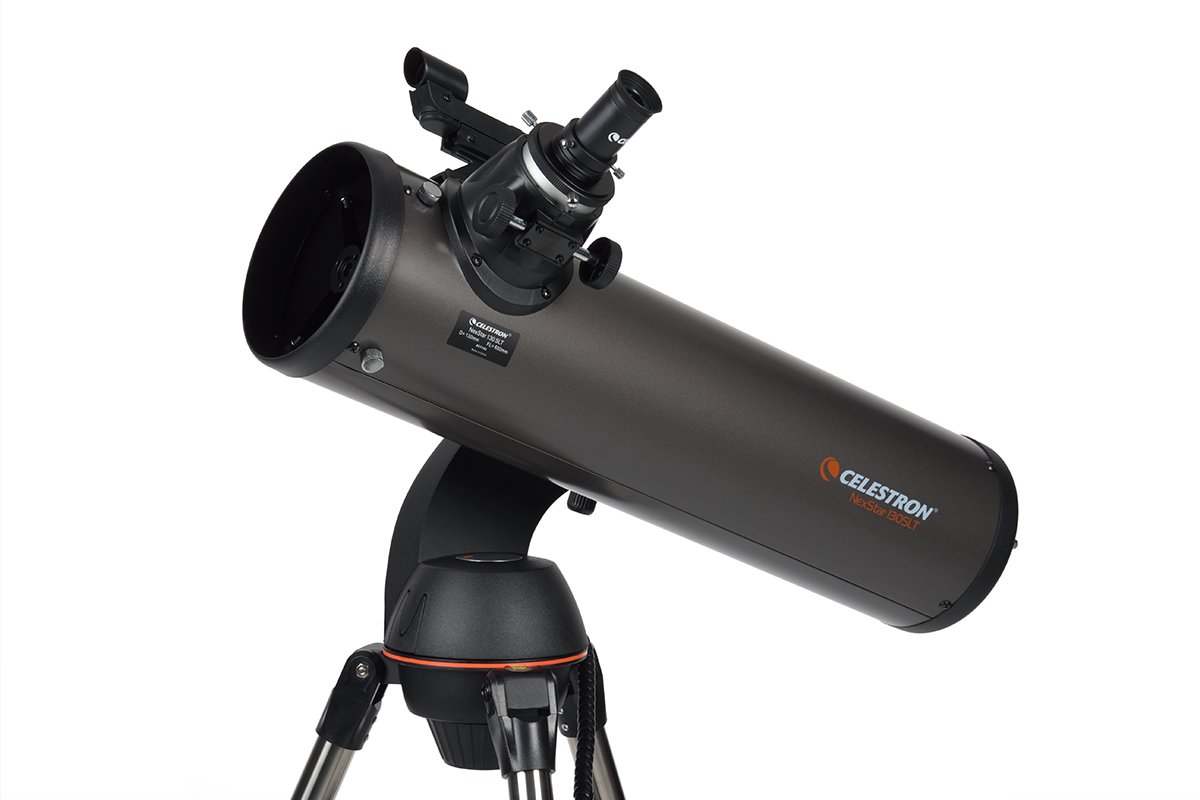 Style: 130 SLT Newtonian The nexstar 130 slt, like the other models in the slt Series, comes with afully computerized hand control that gives you the ability to automaticallyslew to any of its 4,000+ objects, including over 600 galaxies, 300 clustersand dozens of beautiful binary stars. With its pre-assembled, adjustable steeltripod, quick release fork arm mount, and accessory tray, the nexstar 130 sltcan be up and ready to use in a matter of minutes with no tools needed. Thesky align alignment technology and the included star pointer finder scope witha Red LED, makes aligning a breeze. View the details of the lunar surface, therings of Saturn, the polar ice caps on mars, the cloud belts on Jupiter or anumber of the Messier objects using the additional light-gatheringcapabilities of the 130 slt’s 5 inch primary mirror. Because of the Newtoniandesign, the mirror gives fully color-corrected views that are best suited forastronomical use. The internal battery compartment prevents cord wrap duringuse and Auxiliary Port is provided for additional accessories such as GPSaccessory. Includes nsol telescope control software for basic control of yourtelescope via computer (with optional rs-232 cable) and is compatible withoptional nexremote telescope control software, for advanced control of yourtelescope via computer. Celestron’s computerized NexStar 130 SLT adds affordable “Go-To”technology to a compact Newtonian reflector telescope. By using mirrorsinstead of lenses, the Newtonian optics of the NexStar 130 SLT produce animage nearly five times brighter than the NexStar 60 SLT refractortelescope. The package includes everything except the batteries, and featureseasy no-tool setup, two good eyepieces, and even includes a student version of”The Sky” planetarium software. The Newtonian design of the NexStar 130 SLT is optimized to produce brightimages over a wide field of view. When I use an optional 32mm Plossleyepiece, the famous Double Cluster in Perseus looks like a display ofcelestial fireworks with streamers of stars trailing across the 2 degree fieldof view. The standard equipment 25mm eyepiece magnifies the image about 26times, with a wide field of view just right for viewing deep space objectslike star clusters or the Orion Nebula. __The included 9mm eyepiece (72x magnification) offers great views of the Lunardisk and globular star clusters like M13. And when I add a 2x Barlow lens tothe 9mm eyepiece for a total magnification of 144x, I can easily see cloudbands on the planet Jupiter and pick up detail in Saturn’s rings. The NexStar 130 SLT also features Celestron’s patented SkyAlign technology.With SkyAlign I don’t need a star chart or a compass to align the telescope, Ijust enter the date and time then point the telescope at three bright stars.SkyAlign tells me the star names, and allows the telescope to find over 4,000stars, planets, and galaxies by just pushing a button. The accurate trackingmakes it easy to get high power views of the planets, and allowed me to takesome great pictures using a Celestron NexImage webcam. I also like the “Two-Star align” and “Solar System align” modes because I can often get the NexStarsystem up and running while older scopes are still waiting for their alignmentstars to appear in he twilight. Reflector telescopes offer more light gathering power per dollar than anyother design, but that value is balanced by the fact that the mirrors may needto be aligned or “collimated” occasionally. Using Celestron’s CollimationEyepiece __I had no trouble fine tuning the optical alignment, and I was rewarded withsharp views of Lunar craters even when I pushed the magnification up to thetheoretical limit of 300x. The other drawback of a computerized telescope, ofcourse, is battery consumption. An optional PowerTank battery is a handy wayto power the NexStar 130 SLT, and I like to keep the tripod legs short andobserve while seated because this gives me a solid and comfortable view.–_Jeff Phillips_ Pros: Wide field views Computerized go-to tracking Light and portable Cons: Short battery life Sensitive to vibration Suggested Options: Celestron Accessory Kit Celestron PowerTank battery Celestron Collimation Eyepiece See all