His Final Battle: The Last Months Of Franklin Roosevelt

His Final Battle: The Last Months of Franklin Roosevelt 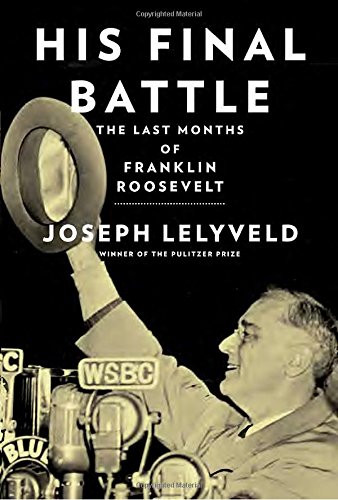 Editorial Reviews Review “A gripping, deeply human account… Moving, elegiac.” –_The New York TimesBook Review_ “Splendid and richly detailed… President Roosevelt won reelection inNovember, was inaugurated in January, and died in April, three months into hisfourth term. After that came the cold war and atomic weapons and a newdiplomatic policy called ‘mutual assured destruction.’ Lelyveld shows withclarity and shrewd judgment how it came about.” –_The New York Review ofBooks_ “Psychologically intense… Pinning down FDR’s innermost thoughts is always anelusive goal for a scholar, but Lelyveld… has the fortitude and skill toproperly analyze FDR’s decision-making process. What makes _His Final Battle_so exceptional is Lelyveld’s admirable ability to write nonfiction with highlystylized lyrical beauty.” –_The Washington Post _ “Gripping,¦ Masterfully told,¦ Lelyveld brings to this project a complex mind(but approachable language) equal to Roosevelt’s complex character (butcomforting rhetoric),¦ A heroic and poignant picture.” –_The Boston Globe _”A compellingly nuanced, almost day-by-day account of the great man’s finalyear of life.”_ –_Time_ _”A careful, somber and sometimes harrowing account of FDR’s last 16 months,¦[Lelyveld’s] full and disciplined investigation of an important theme makes asignificant contribution to FDR scholarship.” –_The Wall Street Journal _ “A gripping book that will substantially deepen readers’ understanding of acritical time in U.S. history.” –_Foreign Affairs_ “Joseph Lelyveld combines his long-honed reporting experience with ahistorian’s eye firmly fixed on this important story,¦ Chock full ofilluminating revelations,¦ If you are faintly nauseated by the current state ofAmerican politics, turn off the cable channel that appeals to your prejudices,and let Mr. Lelyveld take you to a vastly more enlightening time when the maincharacters had plenty of flaws but also vastly compensating bravery andvision.” –_The Washington Times_ “Rarely has Franklin Delano Roosevelt been portrayed with such steely-eyedinsight,¦ A deeply revealing look at a famously enigmatic president,¦ Amasterful study of a masterful politician, a fresh look at one of the mostbeloved and complex of presidents.” –_BookPage _ “Meticulous,¦ The author expertly puts together a string of poignant clues toFDR’s last acts,¦ An elegant, affecting work that offers fresh insights on amuch-mythologized president.” –_Kirkus, _starred review “Joseph Lelyveld traces the last, challenging months of FDR’s life with apitch-perfect blend of meticulous reporting, careful analysis, and deephumanity. For all that has been written about Roosevelt, this deeply-movingbook adds significantly to our understanding of that remarkable man.” –GayTalese _ _”With a seasoned journalist’s built-in skepticism and a gifted historian’sscrupulous respect for evidence, Joseph Lelyveld leads us deeper into FranklinRoosevelt’s ‘thickly forested interior’ at the end of his life than anyonehas ever gone before. _His Final Battle _is now required reading for anyonewho wants to understand the twentieth century’s most consequential–and mostmysterious–president.” –Geoffrey C. Ward, author, _The Roosevelts: AnIntimate History _ “A spellbinding example of the biographer’s craft, _His Final Battle_ byJoseph Lelyveld paints a portrait of Franklin Roosevelt as president,statesman, and commander in chief, frail and dying, but heroic in his resolveto win the war and preserve the peace that would follow. Deftly interweavingthe public and the private, the political and the personal, making use ofdocuments and details others had neglected, Lelyveld offers us an unparalleledhistorical narrative of the last year of the war and the dramatic story of asingular man and the unthinkable challenges he confronted in the final monthsof his presidency and his life.” –David Nasaw, author, _The Patriarch: TheRemarkable Life and Turbulent Times of Joseph P. Kennedy _”A masterpiece, in dramatic prose, combining deep research, subtleimagination, and ingenious speculation, as well as a vivid analysis of ‘TheGreat Tantalizer,’ the ‘devout utilitarian.’ _His Final Battle_ is the work ofa seasoned reporter/historian, elegantly written, hard to put down andimpossible to forget.” –Fritz Stern, author, __Five Germanys I Have Known_ _”Powerful, clear-eyed, and briskly-told, Lelyveld’s account of the lastmonths of a 20th century colossus is great history. It’s a wonder FranklinRoosevelt was ever able to get out of bed, let alone guide the Allies throughthe most perilous period the world had ever known. If you think you knew FDR,think again–Joe Lelyveld brings him to fresh life, in all his humandimensions.” –Timothy Egan, author,_ _The Immortal Irishman_ _”At once human and analytical,_ His Final Battle_ illuminates the perplexingzone where personal fate and large historical processes intertwine. The bookoffers a beautifully-realized, impossible to put down chronicle making freshconnections that deepen understanding of FDR’s closing confrontations withcrises of health and global leadership.” –Ira I. Katznelson, author of_ _FearItself: The New Deal and the Origins of Our Time_ _ About the Author JOSEPH LELYVELD spent nearly four decades as a reporter and editor at _The New York Times, _and served as executive editor from 1994 to 2001. This is his third book since then, following _Great Soul: Mahatma Gandhi and His Struggle with India _and _Omaha Blues: A Memory Loop. _An earlier book on apartheid, _Move Your Shadow: South Africa, Black and White, _won the Pulitzer Prize.

Huge Rainbow Kite For Kids – One Of The Best Selling Toys For Outdoor Games A..

Tales From The Borderlands – Xbox One Standard