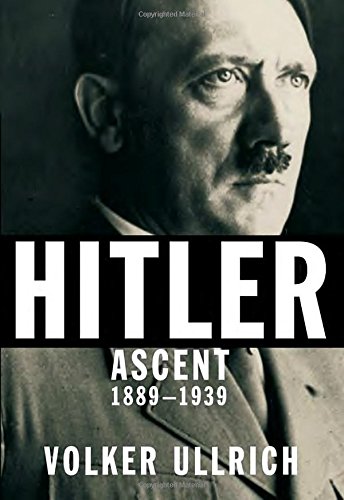 Editorial Reviews Review “This is, by any measure, an outstanding study,¦ Learned, calm and riveting,¦All the huge, and terrible moments of the early Nazi era are dissected, fromthe early beer hall speeches, to the failed putsch, through the economic andsocial dislocation of Weimar and the opportunities that presented,¦ Thepolitical history is meticulously told. But the real strength of this book isin disentangling the personal story of man and monster,¦ Ullrich’s rigour andsensitivity enables him to succeed.” _–_John Kampfner, _The Guardian _(U.K.) “A superb biography of the Fuhrer’s pre-war years,¦Readable and compelling,¦This biography stands apart thanks to Ullrich’s refusal to buy into the idea–assiduously fostered by the Fuhrer himself–that Hitler was invulnerable,¦ Thecontradictory vulnerabilities that he calmly exposes heighten the power ofthis extraordinary portrait,¦ It is a tribute to Ullrich’s absorbing biographythat one contemplates its second volume with a shudder.” –Miranda Seymour, _Daily Telegraph_ (U.K) “A thorough but eminently readable introduction to the receding past,¦. [A]skillfully narrated study, Ullrich reveals Hitler to have been an eminentlypractical politician–and frighteningly so. Timely, given the increase inright-wing intransigence throughout the world, and one of the best works onHitler and the origins of the Third Reich to appear in recent years.” –_Kirkus Reviews _ “Striking,¦ A highly detailed and always interesting critical narrative of[Hitler’s] political life,¦ What mark[s] him out is his conscious abandonmentof conventional morality: the monstrous, shameless ease with which he lied,betrayed and murdered,¦ Full, intelligent and lucidly written,¦ Ullrich’snarrative of Hitler’s rise to power,¦ is full, intelligent and lucidlywritten.” –Neal Ascherson, _The London Review of Books _ “It succeeds brilliantly ,¦ [deserves] to be read as widely as possible.” — David Aaronovitch, _The Times_ “Book of the Week” (U.K) “In a most impressive and massive account, [Volker Ullrich] adds tellingdetails and subtle nuances to the dictator’s portrait and provides a freshperspective on his rise. The result is a must-read book that is bound to be acritical and commercial success.” –Robert Gellately, _Times Higher Education _”Fine biography,¦ Where Ullrich adds greatly to our understanding is by makingthe mercurial, changeable and,¦profoundly unknowable Hitler believable,¦ This isa major achievement,¦ Impressive and revealing biography.” — Nicholas Stargardt, _Literary Review_ “Volker Ullrich compellingly tells us once again that no one could have beenunder any illusion about Hitler’s general intentions towards the Jews from hisvery first appearance as a political figure, even if the detailed planning ofgenocide took some time to solidify,¦ Insightful ,¦ Acutely argued,¦ One of themore unexpected questions we are left with by a study of political nightmaresuch as Ullrich’s excellent book is how we find the resources for identifyingthe absurd as well as for clarifying the grounds of law and honour.” –Rowan Williams, _The New Statesman _ “Volker Ullrich works like a master chef: he trusts his ingredients and usesthem with great care. The Hitler that emerges is droll, clever, hysterical,and at the same time alarmingly pragmatic; the reader is able to follow hisdevelopment from oddball to messiah, propelled forwards by the dynamicsbetween the Fuhrer and his people. Ullrich describes what happened: nothingmore, nothing less. And it is exactly this impressive restraint which givesthe book its two important qualities: it is both reliable and enormouslyentertaining.” –Timur Vermes, author of _Look Who’s Back _ “The first volume of Volker Ullrich’s monumental new biography, _Adolf Hitler:Die Jahre des Aufstiegs 1889-1939_, is beautifully written, as befits theexperienced journalist, and deeply and freshly researched, with many newdetails and a finely balanced judgement, as one would expect from the trainedhistorian.” –Sir Richard J. Evans, _Times Higher Education _”Best Books of 2013″ About the Author VOLKER ULLRICH is a historian and journalist whose previous books in German include biographies of Bismarck and Napoleon, as well as a major study of Imperial Germany, _Die nervose Grossmacht 1871-1918_ (The Nervous Superpower). From 1990 to 2009, Ullrich was the editor of the political book review section of the influential weekly newspaper _Die Zeit_. See all Editorial Reviews