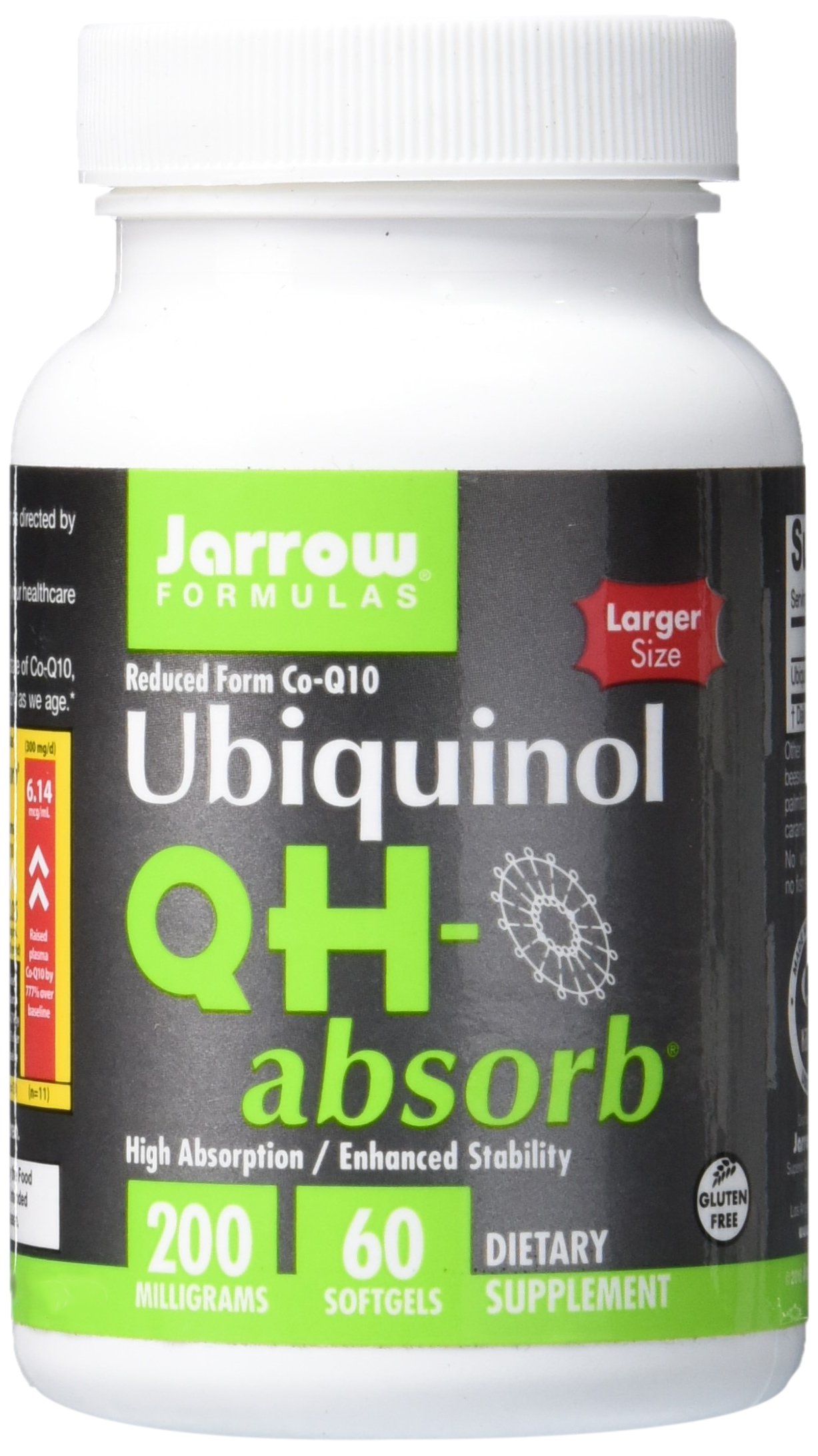 Style: 200 MG | Size: 60 sft gels Ubiquinol is the reduced (active antioxidant) state of Co-Q10, the formproduced by our cells and is significantly better absorbed as a supplement,particularly as we age. Jarrow FORMULAS® QH-absorb is a proprietary enhancedstability formula, which has been clinically shown in humans to increaseCo-Q10 levels up to 777% (6.14x) over baseline at 300 mg per day intake. Ubiquinones are a series of homologous molecules that possess a quinone activecenter and an unsaturated fatty tail. Ubiquinones are so named because theyare widely distributed (i.e. ubiquitous) in nature and throughout the humanbody. Structurally they are very similar to the menaquinones, like vitamin K2.The quinone group is like a courier for protons and electrons, which is thecritical property that allows ubiquinones to act as antioxidants and asimportant intermediates in energy generation. The fatty tail is composed ofisoprenoid subunits, which are five carbon building blocks that help allliving things biosynthesize critical components like immune modulators,essential oils and hormones. The number of isoprenoid units in the fatty tailis often denoted in the name of specific ubiquinones. For instance,ubiquinone-10 is made from ten isoprenoid units. Ubiquinone-10 (aka CoQ10,coenzyme Q10, Q) is more commonly referred to as just “ubiquinone.” This isbecause it is the most prevalent ubiquinone in almost all mammals, includinghumans. Jarrow Formulas QH-Absorb, 200mg, 60 Softgels At a Glance: The active antioxidant form of CoQ10 Supports heart function and antioxidant status Utilizes the Q-absorb natural, proliposomal delivery system for enhanced absorption Designed for those who seek the superior absorption of ubiquinol (QH) for cardiovascular and antioxidant health Particularly useful to older consumers who may not activate CoQ10 sufficiently or whose levels may be very low Supports heart function and antioxidant status. Utilizes the Q-absorb natural, proliposomal delivery system for enhancedabsorption. View larger. Concern about CoQ10 levels is especially important due to concern thatcholesterol-lowering drugs (statins) work by inhibiting an enzyme that is alsoresponsible for CoQ10-ubiquinol biosynthesis. As a result, anyone takingstatins may have reduced levels of CoQ10-ubiquinol. What is Ubiquinol? Ubiquinone and ubiquinol (aka ubiquinol-10, CoQ10-H2, QH, “reduced” CoQ10) areintimately related, as their names suggest. Inside the body, Q (ubiquinone)can only achieve its important functions in energy production , cardiovascularhealth and antioxidant protection with the help of ubiquinol (QH). In fact,all of the benefits that have been attributed to CoQ10 necessitate QHinvolvement. The two do their work by shuttling electrons and protons back-and-forth, cyclically transforming from Q to QH and back again. In energyproduction, CoQ10 facilitates electron transfer within mitochondrial membranesto produce ATP, the body’s energy currency. For antioxidant protection, QH isthe “active antioxidant” form of CoQ10. This means that Q that has not beenconverted to QH is inactive as an antioxidant. Perhaps this explains why circa80-95 percent of total CoQ10 exists as QH in the blood and in healthy tissuesthat require its antioxidant function. Is Taking QH Better Than Taking Q? CoQ10 is critically obtained from the diet, but it appears that absorption ofQ may entail conversion to QH. This conversion occurs as early as in theenterocytes, the absorptive cells in the intestine, and may facilitate theabsorption process. Also under normal conditions there are enzymes that helpregenerate QH from Q, in the body. Unfortunately, aging and illness can leadto both a reduced ability to regenerate QH because of decreased enzymeactivity and a decreased ability to absorb Q itself, possibly for the samereason. After about age 45, total Q levels and QH levels tend to decline in variouscritical tissues. Some physicians have even started to use blood and tissueratios of QH to Q as a biomarker for age- and health-related oxidative stress.So it may not come as a surprise that taking QH can provide benefits thatsurpass those obtained from taking standard Q. But where’s the evidence? QH-absorb Clinical Research Eleven young, healthy adults ingested 100 mg of QH-absorb with food threetimes daily (100 mg, t.i.d.) for fourteen days. Blood levels of total CoQ10,oxidized CoQ10 (Q) and reduced CoQ10 (QH) were measured at baseline and afterfourteen days. This regimen of QH-absorb consumption resulted in a 777 percentmean increase of total CoQ10 levels compared to baseline and a 100 percentincrease in plasma QH levels, the “active antioxidant” form of CoQ10. Two conclusions can be drawn from these study results. First, it appears thateven young, healthy individuals can achieve benefits from taking ubiquinol(reduced CoQ10) from QH-absorb that surpass taking Q alone. Previously, it waspresumed that only older individuals would benefit from taking QH-absorb as itis known that starting about the age of 40, QH levels begin to decrease in thebody. Second, the 777 percent increase of total CoQ10 levels measured aftertaking QH-absorb is more than double the levels achieved by even the best Qsupplements. This suggests QH-absorb is at least twice as efficient in raisingblood CoQ10 levels. Ubiquinol (QH) is Safe Scientists have understood the value of QH for decades. It has just taken thatlong to figure out a way to stabilize QH so it can be formulated into anutritional supplement product. Toxicity studies have shown little concernwith taking QH directly, even at high doses. Plasma QH levels appear toplateau after two to four weeks of daily ingestion and then return near tobaseline two weeks after daily ingestion is discontinued. It also appears thatsupplementation with QH does not reduce CoQ10 biosynthesis in the body. Jarrow Formulas QH-absorb is made with ubiquinol (QH) the more bioavailable,active-antioxidant form of CoQ10. It utilizes the Q-absorb natural,proliposomal delivery system for enhanced absorption beyond that of QH alone. About Jarrow Formulas Jarrow Formulas’ complete line of over 350 nutritional products includesvitamins, minerals, probiotics, standardized herbal concentrates, amino acids,enzymes and enteral nutrition products. Customers can be assured of purity,value and potency when choosing these products. What’s in the Box Jarrow Formulas QH-Absorb, 200mg, 60 Softgels. Other Products from Jarrow Formulas