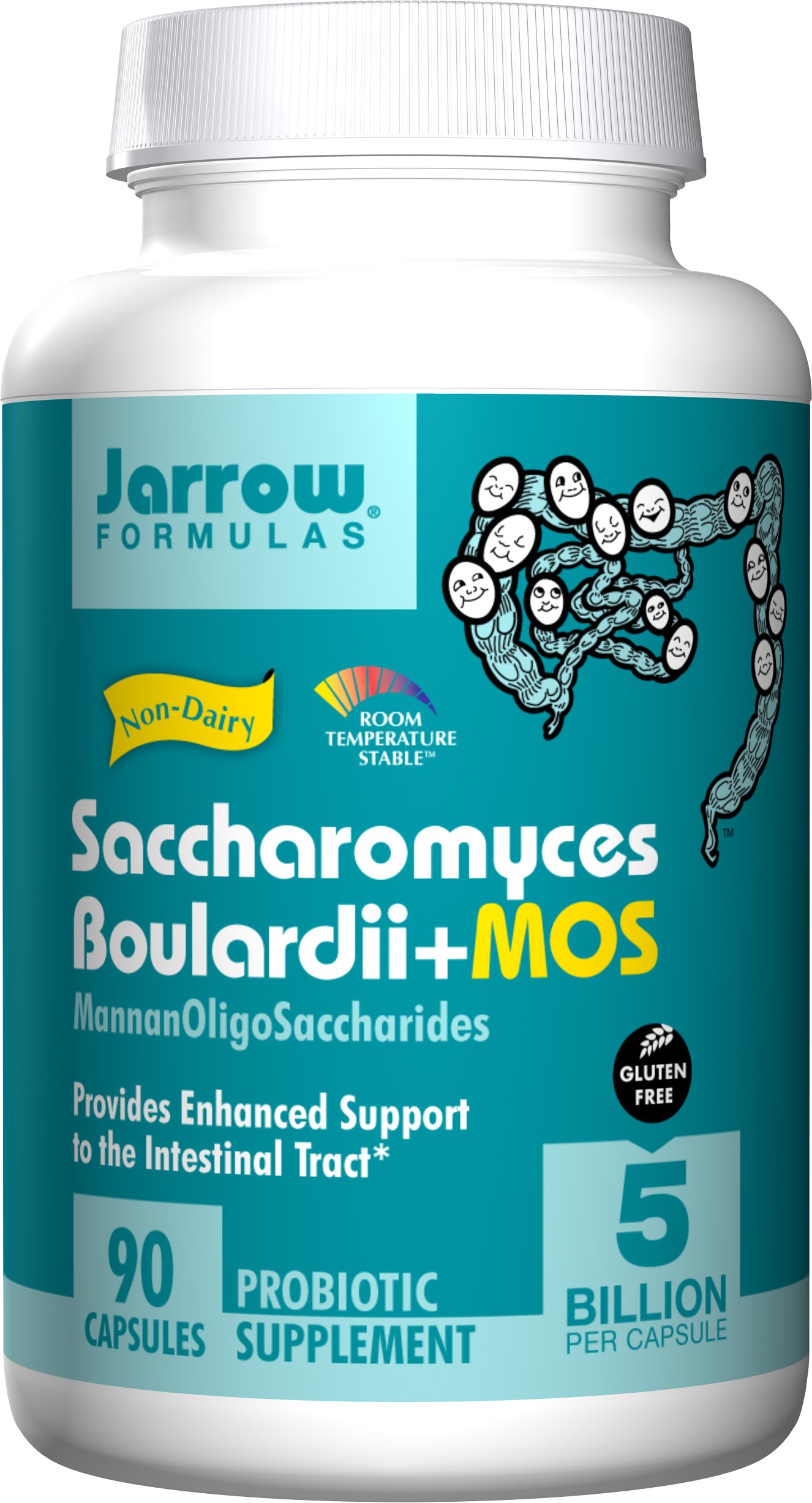 Size: SINGLE Saccharomyces Boulardii + MOS by Jarrow Formulas 90 VegCap SaccharomycesBoulardii MOS 90 VegCap Product SACCHAROMYCES BOULARDIIMOS is a probioticyeast that survives stomach acid and colonizes the intestinal tract. Itpromotes the health of the intestinal tract helps protect its beneficialmicrobiota and enhances immune function. MOS (MannanOligoSaccharides) is anoligosaccharide from the cell walls of S. cerevisiae that can discouragebacteria from adhering to the epithelial cells and reduce their proliferation.Refrigerating SACCHAROMYCES BOULARDIIMOS will further extend shelf-life bysafeguarding the product from heat. Suggested Use As a dietary supplement Take1 capsule 1 or 2 times per day with water or juice. May be taken with food oron an empty stomach – Or as directed by your healthcare professional.Supplement Facts Serving Size 1 Capsule Servings Per Container 90 Amount PerServing Daily Value Saccharomyces boulardii (a subspecies of S. cerevisiae) 5Billion Organisms Bio- In the natural health world, the term “yeast” is typically associated in apositive way with “brewer’s/nutritional” yeast, or in a negative way withCandida albicans (i.e., as in yeast infections). One association that is notcommonly made is “probiotic.” Nevertheless, that’s exactly what Saccharomycesboulardii is, a beneficial yeast used as a probiotic agent to supportgastrointestinal health. Its most important use is when intestinal flora comeunder assault, such as during antibiotic use or when traveling. Jarrow Formulas Saccharomyces Boulardii + MOS, 90 Vegetarian Capsules At a Glance: Probiotic yeast survives stomach acid and helps support healthy intestinal flora Promotes the health of the intestinal tract, helps protect its beneficial microbiota, and enhances immune function Includes MOS, oligosaccharides that can help guard against the adhesion of microorganisms to epithelial cells in the intestines Dairy-free formula Does not need to be refrigerated Probiotic yeast promotes the health of the intestinal tract, helps protectbeneficial microbiota, and enhances immune function. Dairy-free formula does not need to be refrigerated. View larger. Saccharomyces boulardii (S. boulardii) typically reaches a maximum steadystate in 3 days when taken orally, but does not multiply in the gut. Less thanone percent of the ingested quantity is recovered from stools, indicating thatsupplementation with S. boulardii should take place regularly to achievecontinuing benefits. Occasional Diarrhea S. boulardii is particularly effective in relation to occasional diarrhea fromvarious causes. The efficacy of taking S. boulardii orally has beendemonstrated in helping to decrease the chances or intensity of traveler’sdiarrhea, antibiotic-associated diarrhea and some food spoilage relateddiarrhea. In fact, meta-analyses of the pooled results from studies suggest that S.boulardii can decrease the relative risk of antibiotic-associated diarrhea by57 percent to 63 percent. S. boulardii produces proteases that may help toreduce the negative effects of C. difficile produced toxins A and B. S.boulardii can also interact with undesirable intestinal microorganisms andreduce their adherence to the intestinal wall. S. boulardii may also reducesodium secretion and thereby guard against water-loss from intestinal cellsduring occasional diarrhea. Hypersensitive Bowel Individuals with a hypersensitive bowel may experience more inflammatoryepisodes and frequent bowel movements. Taking S. boulardii regularly may helpguard against such intrusions in daily life. Other evidence shows that taking250 mg S. boulardii three times daily can help maintain better lowerintestinal health. Skin Health Although secondary to its effects on gastrointestinal health, S.boulardii maybenefit skin health. In a randomized, double-blind study involving 139 humansubjects with noncystic acne, the effectiveness and tolerance of S. boulardiiwas studied in comparison with a placebo over a maximum period of five months.The results of S. boulardii oral intake were assessed as very good/good in74.3 percent of the patients receiving the preparation, as compared with 21.7percent in the placebo group. More than 80 percent of the people in the S.boulardii group were judged to be considerably or completely improved, whilethe corresponding figure for the placebo group was only 26 percent. Mannanoligosaccharides Mannans are polysaccharides consisting of long-chains of the sugar mannose.They are found abundantly on the surface of human intestinal cells and play acritical role in signaling immune cells. Microorganisms typically use thesemannans as footholds in the intestines, so it makes sense that the body hasevolved mechanisms to start mobilizing a response at the “point of contact.”What’s interesting is that mannans are also expressed on the cell walls of S.boulardii. And it’s believed that these mannans that coat S. boulardii act asanchor site decoys to unfriendly bacteria, providing one mechanism of actionby which S. boulardii helps to protect the digestive tract. Mannanoligosaccharides (MOS) are shorter versions of mannans that aresimilarly non-digestible, chains of mannose units. Structurally, they looklike the mannans expressed on cells that line the digestive tract. So it isperhaps not surprising that they also act like mannans in some respects. Infact, microorganisms floating through the digestive tract can bind theingested, free-flowing MOS “hoping” to get a foothold in the intestines.Instead they are “tricked” into a ride through the digestive system andeventually are flushed from the body. And although this often occurs withbacteria, other microorganisms such as Candida species of yeast are also knownto be susceptible to this protective mechanism of MOS. Saccharomyces boulardii + MOS provides a synergistic effect in promotingintestinal defense by combining the multi-modal probiotic organism S.boulardii with the added benefits of free-flowing MOS. S. boulardii promotesthe health of the intestinal tract, helps support beneficial microbiota in theintestinal ecosystem, and enhances immune function alone, while MOS assists byhelping guard against the adhesion of microorganisms to epithelial cells inthe intestines. Saccharomyces boulardii + MOS is not affected by antibiotics,and does not require refrigeration, i.e., it can be stored at roomtemperature. Refrigeration will, however, extend the shelf life. Avoidtemperatures above 77 F (25 C). About Jarrow Formulas Jarrow Formulas’ complete line of over 350 nutritional products includesvitamins, minerals, probiotics, standardized herbal concentrates, amino acids,enzymes and enteral nutrition products. Customers can be assured of purity,value and potency when choosing these products. What’s in the Box Jarrow Formulas Saccharomyces Boulardii + MOS, 90 Vegetarian Capsules. Other Products from Jarrow Formulas

Bench Seat Protector For Up To 3 Seatbelts With Removable Zipper – Catch Crum..