Just Mercy: A Story Of Justice And Redemption

Just Mercy: A Story of Justice and Redemption 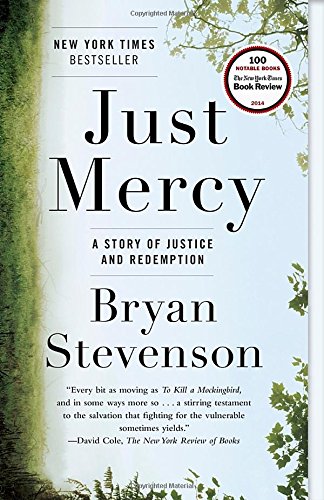 Editorial Reviews From School Library Journal What is the one commonality of people on death row? If the victim is white,the perpetrator is 11 times more likely to be condemned to die than if thevictim is black. When Stevenson was a 23-year-old Harvard law student, hestarted an internship in Georgia where his first assignment was to deliver amessage to a man living on death row. This assignment became his calling:representing the innocent, the inadequately defended, the children, thedomestic abuse survivors, the mentally ill–the imprisoned. This fast-pacedbook reads like a John Grisham novel. One of those profiled, Walter, was at abarbecue with over 100 people at the time of the murder he was accused of, andspent more than six years on death row. The stories include those of children,teens, and adults who have been in the system since they were teens. This is atitle for the many young adults who have a parent or loved one in the prisonsystem and the many others who are interested in social justice, the law, andthe death penalty. A standout choice.–Amy Cheney, Alameda County Library,Juvenile Hall, CA _–This text refers to the Hardcover edition._ Review “_Just Mercy_ is every bit as moving as _To Kill a Mockingbird, _and in someways more so. . . . [It] demonstrates, as powerfully as any book on criminaljustice that I’ve ever read, the extent to which brutality, unfairness, andracial bias continue to infect criminal law in the United States. But at thesame time that [Bryan] Stevenson tells an utterly damning story of deep-seatedand widespread injustice, he also recounts instances of human compassion,understanding, mercy, and justice that offer hope. . . . _Just Mercy_ is aremarkable amalgam, at once a searing indictment of American criminal justiceand a stirring testament to the salvation that fighting for the vulnerablesometimes yields.”–David Cole, _The New York Review of Books_ “A searing, moving and infuriating memoir . . . Bryan Stevenson may, indeed,be America’s Mandela. For decades he has fought judges, prosecutors and policeon behalf of those who are impoverished, black or both. . . . Injustice iseasy not to notice when it affects people different from ourselves; that helpsexplain the obliviousness of our own generation to inequity today. We need towake up. And that is why we need a Mandela in this country.”–NicholasKristof, _The New York Times_ “Unfairness in the justice system is a major theme of our age. . . . This bookbrings new life to the story by placing it in two affecting contexts: [Bryan]Stevenson’s life work and the deep strain of racial injustice in Americanlife. . . . You don’t have to read too long to start cheering for this man.Against tremendous odds, Stevenson has worked to free scores of people fromwrongful or excessive punishment, arguing five times before the Supreme Court.. . . The book extols not his nobility but that of the cause, and reads like acall to action for all that remains to be done. . . . The message of the book,hammered home by dramatic examples of one man’s refusal to sit quietly andcountenance horror, is that evil can be overcome, a difference can be made._Just Mercy_ will make you upset and it will make you hopeful. . . . Stevensonhas been angry about [the criminal justice system] for years, and we are allthe better for it.”–Ted Conover, _The New York Times Book Review_ _ _ “Inspiring . . . a work of style, substance and clarity . . . Stevenson is notonly a great lawyer, he’s also a gifted writer and storyteller.”–_TheWashington Post_ “As deeply moving, poignant and powerful a book as has been, and maybe evercan be, written about the death penalty.”_–The Financial Times_ “Brilliant.”_–The Philadelphia Inquirer_ “Not since Atticus Finch has a fearless and committed lawyer made such adifference in the American South. Though larger than life, Atticus exists onlyin fiction. Bryan Stevenson, however, is very much alive and doing God’s workfighting for the poor, the oppressed, the voiceless, the vulnerable, theoutcast, and those with no hope. _Just Mercy_ is his inspiring and powerfulstory.”–John Grisham “Bryan Stevenson is one of my personal heroes, perhaps the most inspiring andinfluential crusader for justice alive today, and _Just Mercy_ isextraordinary. The stories told within these pages hold the potential totransform what we think we mean when we talk about justice.”–MichelleAlexander, author of _The New Jim Crow_ “A distinguished NYU law professor and MacArthur grant recipient offers thecompelling story of the legal practice he founded to protect the rights ofpeople on the margins of American society. . . . Emotionally profound,necessary reading.”–_Kirkus Reviews _(starred review, Kirkus_ _PrizeFinalist) “A passionate account of the ways our nation thwarts justice and inhumanelypunishes the poor and disadvantaged.”–_Booklist _(starred review) “From the frontlines of social justice comes one of the most urgent voices ofour era. Bryan Stevenson is a real-life, modern-day Atticus Finch who, throughhis work in redeeming innocent people condemned to death, has sought to redeemthe country itself. This is a book of great power and courage. It is inspiringand suspenseful–a revelation.”–Isabel Wilkerson, author of _The Warmth ofOther Suns_ “Words such as _important_ and _compelling_ may have lost their force throughoveruse, but reading this book will restore their meaning, along with one’shopes for humanity.”–Tracy Kidder, Pulitzer Prize-winning author of_Mountains Beyond Mountains_ _ _ “Bryan Stevenson is America’s young Nelson Mandela, a brilliant lawyerfighting with courage and conviction to guarantee justice for all. _JustMercy_ should be read by people of conscience in every civilized country inthe world to discover what happens when revenge and retribution replacejustice and mercy. It is as gripping to read as any legal thriller, and whathangs in the balance is nothing less than the soul of a greatnation.”–Desmond Tutu, Nobel Peace Prize Laureate See all Editorial Reviews