Measure Of A Man: From Auschwitz Survivor To Presidents’ Tailor

Measure of a Man: From Auschwitz Survivor to Presidents’ Tailor 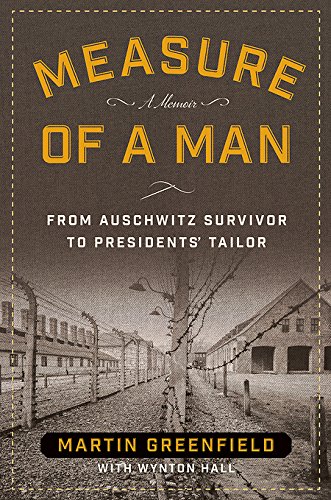 Review “In 1956, Martin Greenfield was a twentysomething Czech immigrantworking as a tailor at the well-regarded Brooklyn suit maker GGG Clothes.Greenfield had gotten in the door, in 1947, with the help of a fellowimmigrant friend and eventually worked his way from the lowly post of ‘floorboy’ to trusted confidante of owner William P. Goldman, who took a shine tohis competitive spirit. GGG was a favorite label of Dwight D. Eisenhower, andthe young tailor couldn™t help himself from passing advice on foreign policyto the Oval Office via the pockets of the president™s new suits. If Eisenhowerwanted to end the Suez Canal crisis, Greenfield suggested in a note, why notgive Secretary of State John Dulles a two-week vacation? Eisenhower eventuallyshared his tailor™s hubris with the D.C. press corps for a few laughs. Theanecdote is one of many in Greenfield™s new memoir that demonstrates theextraordinary experience he had with capital-H history in the back half of the20th century.”—Vanity Fair”It’s a remarkable book.”—Nationally syndicatedradio host Mark Levin”I dare you to read Holocaust survivor MartinGreenfield’s story and not burst into tears. […] Every once in a while abook is written that you’ll never forget, and leaves you telling all yourfamily and friends about. Martin Greenfield’s Measure of a Man: From AuschwitzSurvivor to Presidents’ Tailor is one of those books.”—The Daily Surge –Thistext refers to the Hardcover edition. Read more From the Inside Flap The firsttime Martin Greenfield took up needle and thread was at Auschwitz, to mend theshirt of the SS guard who had just beaten him. Today, he is recognized as”America’s greatest living tailor,” the man who dresses presidents and moviestars.Measure of a Man is Greenfield’s story. More than an unforgettableaccount of survival and triumph, it’s the testimony of a man who came of ageamid the darkest evil in modern history but never lost hope.The Nazis came forthe Jews in Greenfield’s Carpathian village in 1944. Separated from hisparents and siblings as soon as they arrived at Auschwitz, Martin was the onlyone of his family to survive the Holocaust. “Where was God?” he asked therabbi who arrived with Eisenhower’s liberating army a yearlater atBuchenwald.Greenfield arrived in America in 1947, nineteen years old andpenniless. He went to work as a floor boy at a Brooklyn clothing factory andquickly became a virtuoso tailor, making suits for the president and thebiggest names in Hollywood. Within thirty years he owned the firm.Hisinsistence on the highest standards, his humility, and his humor have madeMartin Greenfield the clothier—and inevitably the friend—of many of thegreatest legends of American politics, entertainment, and sports. He haspassed foreign policy advice to Eisenhower on notes tucked into his suitpockets, encouraged a disillusioned Paul Newman on the brink of abandoning hisacting career, and coaxed both Bill Clinton and Carmelo Anthony intotails.Throughout his long and improbable career, Greenfield has never lost hissense of gratitude for the country that plucked him out of hell and enabledhim to build a new home and family. “America is dreams,” he writes. “InYiddish, we have a proverb—’Heaven and hell can both be had in this world.’But America is the only place I know that lets you turn your hell into aheaven. It did for me.” –This text refers to the Hardcover edition. Read moreSee all Editorial Reviews