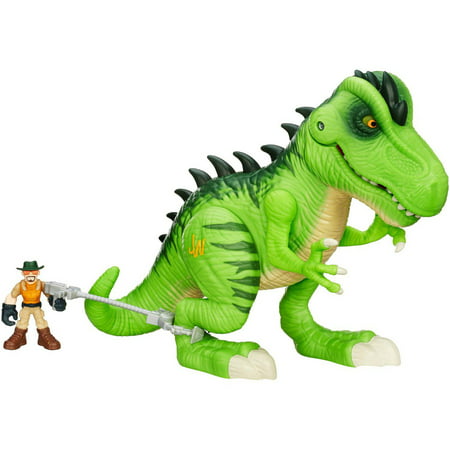 Your little one can gear up for epic prehistoric adventures with this incredible Playskool Heroes Jurassic World T-Rex Figure. This enormous lizard is the king of the dinosaurs and it roars and stomps. Your little one can have non-stop prehistoric battles with his Jurassic World T-Rex toy. This collection inspires creativity and imaginative play in your child. The capture claw tool can close around the dinosaur’s ankle. The T-Rex figure has an enormous chomping jaw with a wide opening. This set comes with the large, green dinosaur, the hunter and the claw tool. Playskool Heroes and all related characters are trademarks of the Hasbro company. The Playskool dinosaur T-Rex figure features lights and sounds, making the action more intense. The tracker figure can snare the fierce beast with his capture claw tool. Your child can pit dinosaur against tracker for many different outcomes.The giant lizard’s chomping jaw may defeat the hunter. The Playskool Heroes Jurassic World T-Rex Figure can make your child’s adventures come to life.