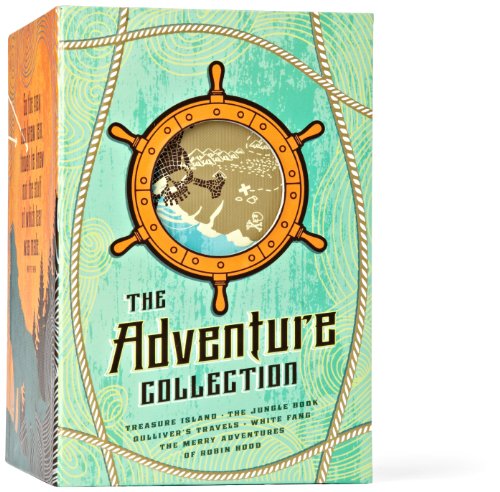 Editorial Reviews Review A Look Inside _The Adventure Collection_ Click the images below for a sneak peek at the four-color illustrations insidethe books. _ _ _ _ _ _ _ _ About the Author Nobel Prize-winner, British poet laureate, essayist, novelist, journalist, andshort story writer Rudyard Kipling wrote for both children and adults,with many of his stories and poems focusing on British imperialism in India.His works enjoyed great popularity during the late nineteenth and earlytwentieth centuries, including _The Jungle Book, Kim, Puck of Pook’s Hill, _and _Rewards and Fairies_. American author and journalist Jack London is best remembered for hisnovels _The Call of the Wild _ (1903) and _White Fang_ (1906), both consideredAmerican classics. He also wrote short stories, plays, nonfiction, andpolitical essays and was heavily involved in social activism. His writingsabout the Klondike Gold Rush, in particular, are widely enjoyed today. Author, artist, and teacher Howard Pyle was one of America’s leadingillustrators, educating and inspiring a generation of artists. In 1883, _TheMerry Adventures of Robin Hood_ was published; its detailed and thoughtfuldesign set the bar high for book production in the United States. Scottish novelist, short story writer, essayist, and poet Robert LouisStevenson is best known for his works _Treasure Island, The Strange Case ofDr. Jekyll and Mr. Hyde_, and _Kidnapped_, all written between the years of1883 and 1886. To this day, _Treasure Island_ remains one of the mostmemorable adventure novels for children. Jonathan Swift was an Irish satirist best known for _Gulliver’s Travels, _ immensely popular when written in 1726 and now considered a classic in English literature.