The Sworn Sword: The Graphic Novel (A Game Of Thrones) 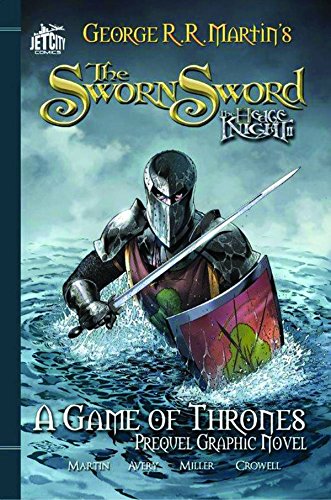 Editorial Reviews Review A Look Inside _The Sworn Sword: The Graphic Novel_ _ _ _Click here for a larger image_ _ _ _Click here for a larger image_ _ _ _Click here for a larger image_ About the Author George R.R. Martin sold his first story in 1971 and has been writingprofessionally since then. He spent ten years in Hollywood as a writer-producer, working on _The Twilight Zone, Beauty and the Beast_, and variousfeature films and television pilots that were never made. In the mid ’90s hereturned to prose, his first love, and began work on his epic fantasy series,A Song of Ice and Fire. He has been in the Seven Kingdoms ever since. Wheneverhe’s allowed to leave, he returns to Santa Fe, New Mexico, where he lives withthe lovely Parris and two cats named Augustus and Caligula, who think they runthe place. Ben Avery is a lead writer and editor with Kingstone Comics. His comic bookcareer began when he was selected by George R.R. Martin to work as the scriptadaptor of the comic book fantasy miniseries The Hedge Knight, based onnovellas by the New York Times best-selling author. After that, he went on toco-write/co-create the critically acclaimed Lullaby and The Imaginaries forImage Comics, co-create and write the children’s literature inspired fantasyThe Oz/Wonderland Chronicles, develop and write the historical epic Kingdomsfor Zondervan, and the sequel miniseries The Hedge Knight II, published byMarvel Comics. Javier Saltares is a well-respected comic veteran with longcreative stints at both Marvel and Dark Horse Comics with such projects asWolverine, Ghost Rider, and Moon Knight. In _The Book of God_ he delivers amasterful performance in illustrating a divinely historical process. Mike S. Miller is a veteran comic book artist, working on comic books rangingfrom Superman to Wolverine. Mike is also the cofounder and art director forAlias Enterprises and Cross Culture Entertainment.